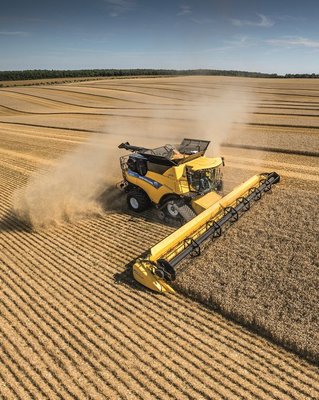 New Holland’s new CR Revelation combine range takes automation to a new level with the award-winning IntelliSense system and introduces a host of improvements that further consolidates the supremacy of the world’s highest capacity combine.

With IntelliSense, the operator can choose from four strategies: Limited Loss, Best Grain Quality, Maximum Capacity, or Fixed Throughput. The patented cleaning shoe sensors provide very precise measurements of the load, and based on this data the combine will proactively constantly adapt Twin Rotor™ speed and vane angle, fan speed and the opening of pre-sieve, upper and lower sieve to automatically deliver the desired result.

The CR Revelation’s IntelliCruise crop feeding system, which automatically matches the forward speed to crop load, now features automated ground speed functions and offers a choice of three harvesting strategies, enabling the operator to achieve the desired result: the new Maximum Capacity strategy increases the combine’s ground speed to reach maximum engine load or maximum ground speed; the Fixed Throughput strategy varies ground speed to maintain a pre-set load on the combine, so that productivity remains constant in varying yields; the Limited Loss strategy  varies ground speed to maintain a set flow, but if losses become excessive, throughput is reduced to limit losses.  Three settings are available to adjust the boundaries of the IntelliCruise system with three settings: Maximum engine load, Maximum ground speed and Feed rate sensitivity setting, which enables the operator to define the responsiveness of the system.

The new CR7.80 and the next model in the range, the CR7.90, are the first to comply to Stage V emissions standards, which mandate a further 40% reduction of Particulate Matter content compared to previous Stage IV regulation. They achieve the new emission limits with the Cursor 9 engine and the new HI-eSCR2 technology developed by FPT Industrial. This innovative after-treatment system is a maintenance-free, patented solution that minimizes operating costs. The Cursor 9 features a simple layout and is EGR-free, thus granting extreme productivity and reliability.

The new CR Revelation features a new Ground Drive with a two-speed gearbox, integrated wet brakes, a bigger hydrostatic pump, and electrohydraulic differential lock operation. The gearbox offers two speed ranges – one for field work, from 0 to 17 kph, and one for road travel from zero to the maximum speed, which is set at the factory according to local regulations in each market. Maximum speed is reached at reduced rpm, resulting in lower fuel consumption.

The new two-speed ground drive delivers more tractive effort, improved hill climbing and faster response due to the bigger hydrostatic pump. There is no need to stop to shift gears, in field operation or road travel, increasing the combine’s efficiency.

The wet brakes and servo valve improve braking control and add to the machine’s safety features, which also include the new double acting park brake. The wet brakes also ensure that braking performance is maintained for the entire life cycle with no brake pads replacement or calliper maintenance, resulting in lower operating costs. They are integrated and fully sealed off from dust and dirt, eliminating the risk of contamination.

A new remotely controlled electrohydraulic differential lock is available. It is effortlessly operated by a foot switch in the cab. It remains engaged under hydraulic pressure, and bevelled teeth on the lock jaw coupler ensure it is actively disengaged when the diff lock is switched off in the cab.

What are you looking for?