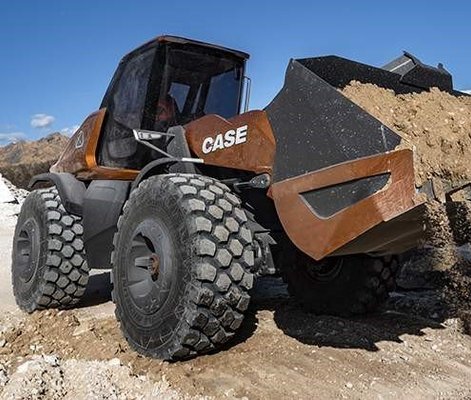 A few weeks ago, we announced you something about this new and innovative project by Case, which is definitely revolutionising the construction market.

The "Tetra" concept has attracted the curiosity of many users who have asked us about the details of the project, and, above all, which Case machines have this new technology.

That's why today we are going to dive a little deeper into the Tetra project and the new methane powered excavators that are already a reality within everyone's reach.

First of all, where does the name "Tetra" come from? Many of you will already know that Tetra means four in Greek. In this case it refers to the four hydrogen atoms that combined with a carbon atom methane form.

This engine powered by Compressed Natural Gas has been developed by a group of specialists who already carry on their backs the design of almost half a million gas-powered engines that already circulate around the world.

But the interesting thing about Case's new Tetra engine is not just its brilliant background, but the countless wonders it brings under its "brand new armor”.

Although many of these advantages are shared by other "Tetra" machines from the Case group, today we are going to focus on the ECO excavators from the Tetra project whose engine generates 230 hp with a 24-hour uninterrupted runtime.

The TETRA concept can reduce up to 95% the level of CO2 produced by a diesel engine and up to 90% less nitrogen dioxide and up to 99% less particulate matter, which represents a reduction in emissions of up to 80%.

The Tetra excavator has been designed by renowned David Wilkie, Design Director at CNH. And indeed, the Tetra project machines make themselves noticeable by calling attention to where they go.

Its design has revolutionized the sector with a combination of beauty and functionality:

Michelin, as a technology partner of Case Construction, has designed airless tyres. This innovative concept of large tyres and rubber structure, among other things, provides excellent resistance in extreme conditions.

In short, driving a Case Tetra excavator is like advancing 500 years in time.

If you want to know more about new Case's "Project Tetra" excavator, come to any of our CM93 offices and discover all the ecological and technological innovations Case has for you. It certainly won't leave you indifferent.

We invite you to watch these following videos in order to have a better appreciation.

What are you looking for ?